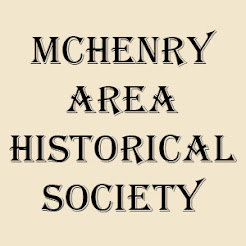 The purpose of the McHenry Area Historical Society is to preserve, promote, and present artifacts relating to the history and lives of the residents of the McHenry area community. 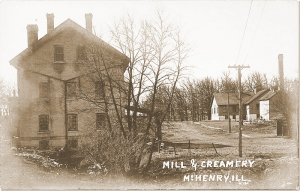 A. H. Hanly & Sons – The McHenry Brick Mill is now a designated Landmark

We at the McHenry Area Historical Society, as well as the McHenry Landmark Commission, are pleased to announce that our little yellow brick mill, The A. H. Hanly & Sons McHenry Brick Mill is now a designated Landmark!  Thank you to the McHenry City Counsel for voting yes!

This unique, one-of-a-kind McHenry treasure is from my personal collection. This is a handwritten letter dated May 26, 1891.  It is written on stationary from the Office of A. H. Hanly & Sons – Proprietors Of The McHenry Brick Mills. There is nothing written on the back and there is no second page ,so I’m not sure who wrote it, however, I do have a few clues. 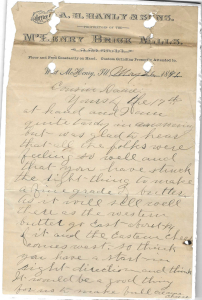 Yours of the 17th at hand and I am quite tardy in answering but – was glad to hear that all the folks were feeling so well and that you have struck the right thing to make a fine grade of butter, as it will sell well there as the western butter go East – about 1/4 of it and the Eastern cheese comes west – so think you have a start in right direction and think it would be a good thing for us to make full cream cheese.”

First, the letter is dated May of 1891.  Alexander Hanly passed away in January of 1891 so I know it wasn’t written by him. He had four sons, Samual, George, John and Daniel.The letter is addressed to “Cousin Daniel”.  Back in the day, the words brother and cousin were interchangeable. I suspect that the letter was written by George to his brother Daniel.  George spent most of his time working on the farm and at the mill and I believe Daniel did some traveling.  Although I can’t confirm this theory right now, I may be able to with a little more research.For now, our newly designated landmark will have a plaque soon.  I will post here when I have specific date. 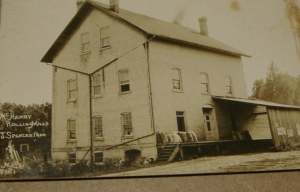